Melisa Prestianni was born on October 14, 1974 in Brooklyn, N.Y. She is the oldest of three children and started her singing debut in her family’s coffee shop singing Christmas tunes. Every year she would always ask for instruments as birthday and Christmas gifts. After her 4th birthday, she received her first child-sized guitar and began unknowingly strumming and making up words as best as she could with no lessons at all.

In the summer of 1984, Melisa moved to N.J. Her grandfather was a very Godly man, and gave Melisa Godly foundation as a child. As with most teenagers, his preaching’s seemed to be a burden at the time, but she would later come to realize that his prayers and teachings would have a major impact on her for the rest of her life. Not only did Melisa share his love for God but also his musical talents being that he used to sing for his local church and smaller theater productions in the area.

Melisa graduated Bloomfield College in 1997 with her Bachelor’s Degree in Criminal Justice and Sociology while balancing playing 2 sports for which she received a full athletic scholarship. It was then that she and her grandfather would share the word together whenever they had the opportunity. On February 26, 2002, her grandfather passed away leaving behind a very loving family and the seeds of God that he had planted within them. Due to her passion for singing, in her late 20’s, Melisa ventured out and gained some experience and exposure from singing in front of small audiences. She would perform in restaurants and coffee houses, which was very different for her since, as a child, she had only appeared in front of her own stuffed animals while singing into a hairbrush. As Melisa grew closer to God, she realized that the talent God had given to her was a gift, and felt deeply blessed and inspired to share the gift with others.

She instantly began praying and asked God to fill her with only the words that He would want her to sing. Under the total grace of God and help from her future husband to be, and a friend, she had written, composed, recorded and released her first album in 2006. This album was completed in a three month span, leaving those in the music industry extremely amazed. Due to Melisa’s own amazement in how quickly it was completed, she felt inspired to name the album “Overwhelmed With Love”.

“My prayer was to touch everyone,” she states simply, “but especially the non-believer. I named this album “Overwhelmed With Love” because that’s exactly what I felt…overwhelmed and flooded with the Lord’s love and it changed my whole life.” Melisa is so thankful and extremely blessed

While that album was being recorded, Melisa was already halfway through the next album. She and her husband realized that this next album would take on a whole other level. She felt in her heart that it was a sequel to the first, a continual story that the Lord desperately wanted to share. The Lord named the album “Reign Down”, and it was released in 2007, exactly one year after “Overwhelmed With Love”.

Melisa has many hopes for the upcoming years. “All you have to do is look around you. Who’s hurting, who feels not loved, who feels depressed and alone, who’s having financial difficulties, health problems, the list goes on and on. I always knew the Lord had a purpose behind all of it, from the release of the albums, down to every last word we wrote. This is the perfect time for these albums to come out. The time is NOW! Its time to bring restoration and hope to all people and most importantly bring the message of God’s love.” Melisa’s only prayer is that she could give the joy, peace and love she found in Christ to others. 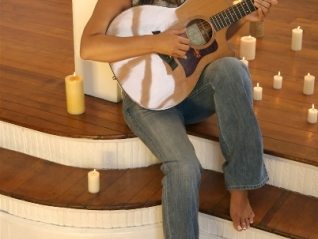